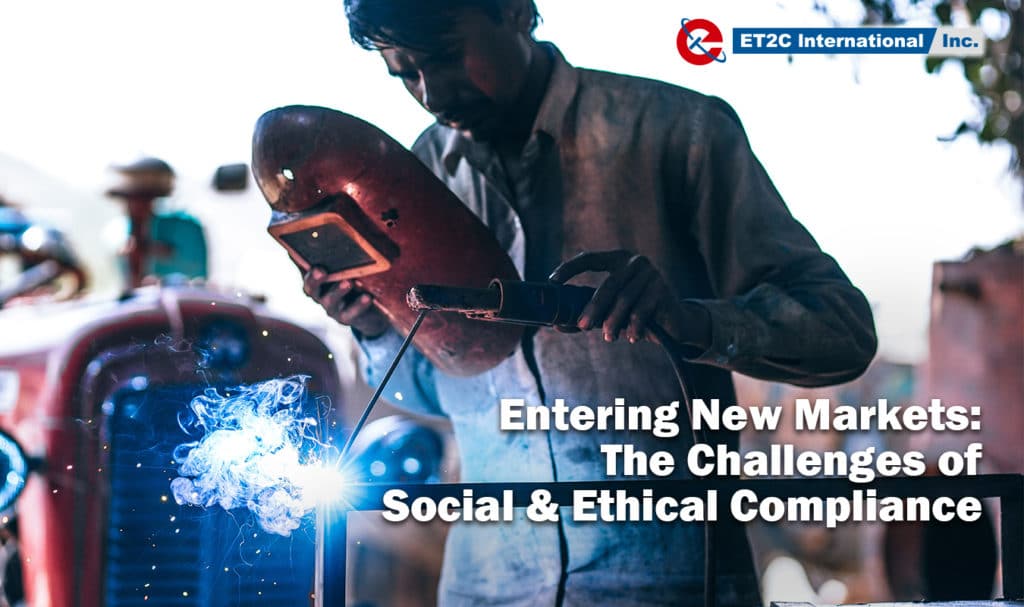 Asian sourcing markets are in a state of flux. With the rise of protectionism, currency volatility and emerging manufacturing economies, companies are increasingly looking to pursue diversified sourcing strategies. Whilst the old adage of ‘not putting all your eggs in one basket’ rings true, entering new sourcing jurisdictions is not always easy. Not only must suppliers meet the quality, capacity, price and delivery requirements, but also all relevant compliance requirements. Certain markets present their own unique issues with regards to compliance expectations. Whether cultural, regulatory or standard business practices, having an insight will help mitigate the risk of buying from these countries.

In recent years, social and ethical compliance has become increasingly important for any purchasing decision, as issues like worker safety, modern-day slavery, fire safety and working hours have gained attention from not only NGO’s and consumers, but both governments and investors alike. ‘Corporate Social Responsibility’ strategies are widespread and ethical audits are not only common place anymore but mandated.

China’s manufacturing base has already been through an extensive compliance transformation, due to the audit requirements that have been in place for many years (backed by the Government recently on environmental practices). Similarly, Vietnam also has years of experience in the compliance arena; even to the point where new technologies are being invested in and the wider story is compelling. For example, one Vietnamese garment factory’s dye treatment plant is so good that they are using it to clean the local communities drinking water. That’s not to say that there is not any non-conformance in these markets, but just that the manufacturing base is well developed and generally understands the requirements to export products.

What about other markets that fall further from the China basket though?

Where is Sourcing Going?

Cost has always been a driver in determining emerging low cost manufacturing markets. Industries that have a reliance on cheap labor, such as garments and textiles in particular, are often the earliest entries into these markets. Many companies are therefore looking towards low-cost countries in Southeast Asia, such as Bangladesh, Cambodia, Indonesia and Myanmar, where there is an abundance of low cost labor, while others are focusing on newer locations in Africa, specifically Ethiopia.

Clearly, Asia as a continent has its own idiosyncratic operational and regulatory business practices that provide an overlay of complexity when working in this part of the world. Corruption, language, cultural differences, developing fiscal and monetary policy are all often referred to. However, when entering new emerging manufacturing markets, which are not as experienced with exporting products, there are often additional challenges as the nascent manufacturing sector emerges. Being aware of such challenges in these alternative sourcing destinations should be an integral part of working with suppliers from these markets.

Bangladesh’s large population, low minimum wage and high capacity strategically places the country as a great option as an alternative sourcing location. Although it has seen significant growth particularly in the traditional ‘cut and sew’ categories over the past five years, this has only seen an increase of 0.9% in exports of global market share .

Ever since the devastating and tragic collapse of Rana Plaza, workplace safety has been a key focus with the emergence of the internal initiative, the Accord on Building and Fire Safety. The accord has been responsible for the upgrading of just under 2,000 factories including fire door installations, compliant electric wiring and sprinkler systems. The Government is now looking to take over from the Accord even though some media outlets are reporting that they are not in a position to. The concerns around building safety persist with a spate of deadly fires breaking out in recent months. The decision is currently with the High Court as to whether the Accord can extend and continue its work.

After years of Junta rule, Myanmar does not have developed laws and regulations that support the manufacturing sector. While their fellow Asian counterparts have had exposure to social and ethical compliance requirements, many factories in Myanmar simply lack this knowledge. There have been multiple reports of underage workers and inconstant policies with minimum hiring age. Although child labor is illegal, companies have faced issues with proof of age and tampering with age verification.

The Sourcing Journal reported that many factories have found their employees regularly working more than the permitted weekly limit, usually without correct compensation, as employees do not know how to calculate their wages. Factories tend to lack compensation packages or have ones that conflict with Myanmar law for overtime and paid leave. The factories also lack experience with fire safety and emergency procedures leading to unsafe working environments and proceeds. The country’s limited rule of law and underdeveloped regulatory regime therefore make Myanmar a riskier sourcing destination as it is more susceptible to land disputes, corruption and general social and ethical compliance. There has also been the recent case of the treatment of the Rohingya People and the broader impact on international perception of doing business with this country.

Cambodia, like some other South East Asian countries, has duty exemptions on shipments to the EU. It is part of the ‘Everything but Arms program’ which allows what the bloc calls “vulnerable developing countries” to pay fewer or no duties on all their exports to EU bloc. However, the EU is considering revoking the special trade deal as they say the Cambodian Government had engaged in “serious and systematic violations of core human rights and labor rights”, which is one of the programs stipulations. According to Ecotextile, The American Apparel and Footwear Association (AAFA), Fair Labor Association (FLA) and six other apparel industry organizations have written letters to Prime Minister of Cambodia urging action. These letters highlighted problems linked to criminal charges and convictions of labor leaders, the Trade Union Law of 2016, and the diminished role of the Arbitration Council. Each cited as a factor for hindering progress towards improving workers rights. Beyond these, the country’s manufacturing sector also faces poverty wages, gender inequality and violence, and the potential impact automation may have on the further degradation of workers’ rights.

Ethiopia offers a lot of opportunity for sourcing companies with low costs and the ability to become a source of raw materials. However, social and ethical compliance has been a significant issue. Like many Asian sourcing locations Ethiopia has many health and safety, workers compensation, and corruption concerns. However, unlike the Asian destinations mentioned, Ethiopia lacks a minimum wage. Companies already invested in Ethiopia have faced issues with land disputes as the Government has assigned land that communities consider to be jointly owned grazing land. This raises concerns of potential land grabs in Ethiopia and other potential social compliance issues. As one would expect, the general understanding of compliance is less widespread and therefore increases the risks to those investing in Ethiopia.

There is no doubt there is, to a certain extent, a commonality of issues around compliance when operating in Asia. It should also be remembered that there are examples of social and ethical non-conformance in developed markets as well. It is all of our responsibility to ensure that we are engaging with businesses, wherever they are located, that understand social and ethical compliance.

Ultimately, price will always be a driver. And with that, new markets can in certain industries provide cost savings but it is important to remember that there will generally be a higher level of risk in low cost markets. Often companies will look to leverage an established factory (such as Chinese, Taiwanese or Korean) that is relocating or opening a new facility in a new market. In these cases, there is often a presumption of similar compliance practices being transferred to the new site.

At ET2C we are committed to social and ethical compliance. We are constantly monitoring our Asian supplier base and are in the process of setting up our own Code of Conduct at all our vendor sites to reinforce the practices we expect of our partner factories. We continue to stay up to date with new sourcing destinations through our network of partners where we do not have our own offices. For more information, please contact us.