The Dawn of the Machines: Automation in East Asia 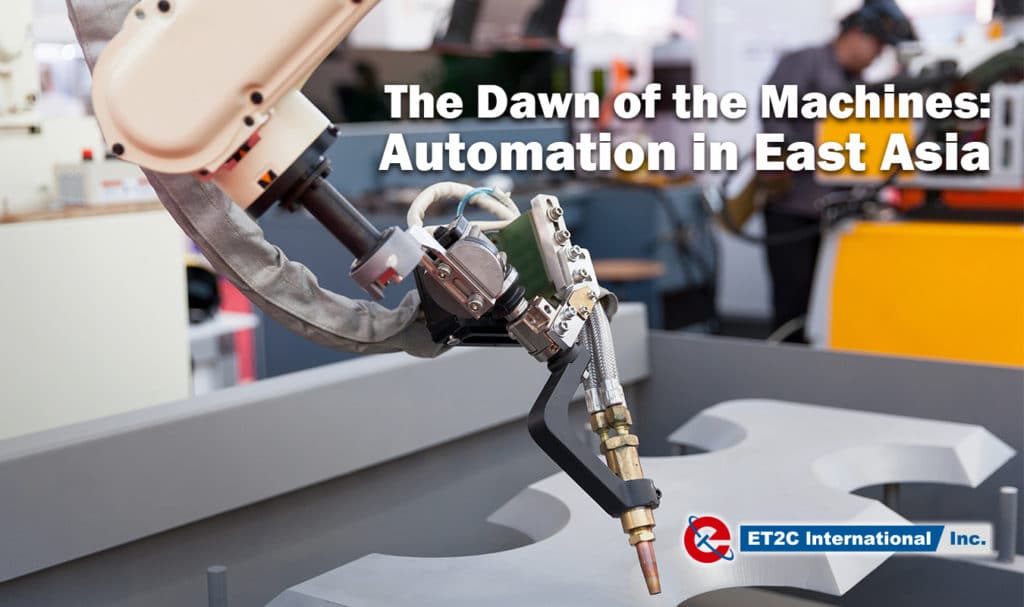 When the word “automation” is mentioned, what comes to mind? Is it self-driving cars that allow you to catch some extra sleep on the way to your job? Or is it some futuristic notion of a robot butler who is able to clean your house, walk the dog, and maybe even do the laundry? Well, the concept of robots doing our work for us is not as far off as it may seem. According to the Brookings Institute, 25% of American jobs are already at “high risk” for being overtaken by automation. And that number has been expanding from factory line jobs to more white-collar professions like accountants, data analysts, and even HR directors.

Automation is defined as “the technique of making an apparatus, a process, or a system operate automatically.” In other words, it’s creating a machine or utilizing artificial intelligence (“AI”) to do the job that person or team of people would normally do. Today, jobs centering around food prep, production, and office administration are among the highest risk for automation, with AI being sufficient to cover 70% or more of the occupation’s responsibilities. While workers in the United States and Europe may be nervous for the rise of AI, many countries in East Asia are already experiencing mass automation.

In 2017, Asia led the world with the highest population of robots. With over 1 million robots within the region, Asia has already started to experience the economic and social benefits and risks associated with massive-scale AI and automation. To capture the sheer scale of these advancements, the IMF has estimated the world’s robot population in all continents. Here, Asia far outnumbers all other regions by claiming 65% of the world’s robots, 50% of which are located in China.

As far as robot density is concerned, Korea and Singapore are global leaders, followed closely by Germany and Japan (IMF Blog, 2018).

Within Asia, China is automating its manufacturing capability whilst the rest of its Asia neighbours are slow to follow. This is aligned to Beijing’s 2025 initiative of “Made in China”, which focuses on Smart manufacturing. This should lead to additional productivity gains and ultimately reduce the competitiveness of some of the smaller emerging exporting countries.

Smart manufacturing is a broad term that describes manufacturing processes that use technology such as robotics, AI, digitisation to drive efficiencies and increase the levels of agility within the production cycle. Importantly, in line with the ever-evolving consumer, this will enable mass customisation and enable Brands to create more personalised experiences for their customers.

When viewing some of this data, some skeptics may wish to point out that automation is simply a niche market or fad. They believe that human labour, with all of its flaws and risks, will prevail in the long term. Yet, world-recognized authorities on economic trends, such as the IMF and WEF, seem to forecast otherwise. The World Economic Forum stated in an article published in September that “More robots than humans doing technical work may bring down the cost of business, including labour costs, significantly.” Using conventional economic knowledge that firms will try to maximize profit and reduce costs, it seems extremely likely that many businesses could adopt automation into their manufacturing processes. This is especially the case if the cost of robots continues to fall and the opportunity cost for not adopting automated processes increases.

Manufacturing also stands to gain from increased automation. Most companies using robotics justify their decision to make the switch with increased productivity and producing more outputs. Automated systems are usually able to produce with less variability than human beings, which often results in greater control and consistency in quality (Groover, 2019). It’s clear that robotics and automation offer many advantages to a firm. Yet, there are still some costs associated with phasing out human labour.

Brands themselves are also investing in hi-tech manufacturing. Nike, Adidas and Under Armour are investing millions of dollars in new technologies that will revolutionise how and where they make their products. It is estimated that by Nike using ‘Flex manufacturing’ to manufacture Nike Air shoes, they will be able to reduce the cost of labour by 50%.

Clearly the level of automation in a manufacturing plant is highly dependent on the products being made. The Garment sector, for example, still to a large extent relies upon low-value added manual labour. This has enabled the industry to globalise to many different emerging manufacturing countries around the world. As a result, it is likely that the clothes that you are currently wearing are made in multiple different export markets. The cost advantages of broad automation within the Garment industry is not therefore immediately obvious versus the capex required. In stark contrast, automated production lines for car manufacturing are now common place.

There is no doubt that Robotics and AI will continue to develop and become more common at manufacturing plants across Asia. China is leading this evolution, supported by Central Government. Therefore, expect to see levels of automation broadly increase in factories to drive productivity gains and more agile production. The rise of the machines is a reality, but do not expect to hear the phrase ‘I’ll be back’ quite yet!

We are constantly speaking with our factories to understand what automation means to them and what the future holds. To learn more, contact us.