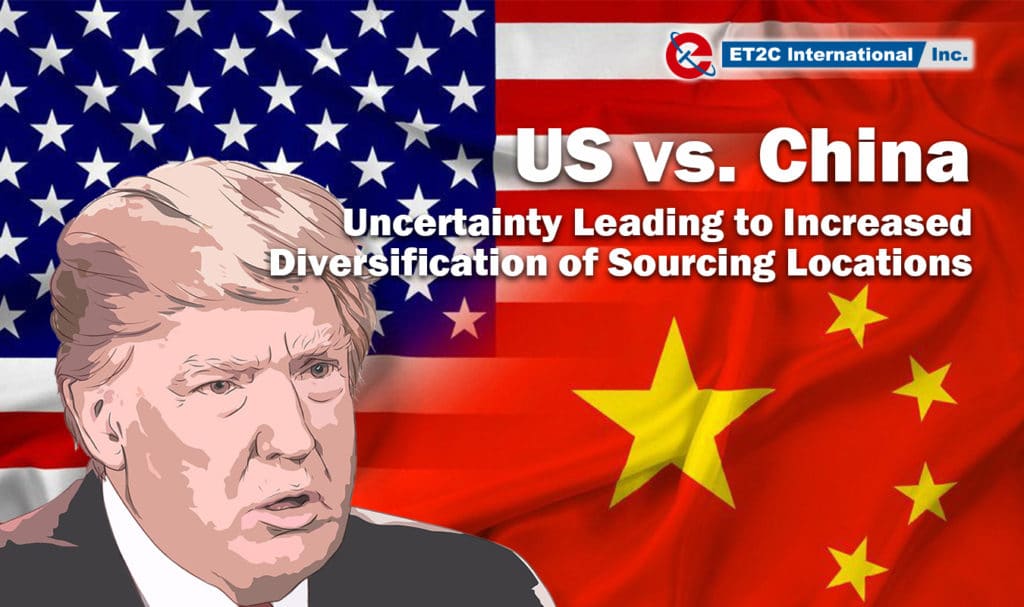 Like with Brexit, uncertainty is on the rise as negotiations continue with no finite deadline. As the two largest economies in the world, the United States (US) and China trade war have put large amounts of pressure on the global economy. The tit-for-tat tariff battle has cost both economies billions of dollars, disrupted supply chains and rattled financial markets. In February, President Trump, for the second time, delayed his plans to increase tariffs on Chinese goods to 25 percent from the current 10 percent citing the amount of progress achieved in discussions. As both countries continue with discussions, the world waits in anticipation.

US Treasury Secretary Steven Mnuchin told reporters within the last couple of weeks that talks are progressing well, but there is still much work to be done. He stated that the current agreement would go “way beyond” previous efforts to open China’s markets to US companies and hoped that the two sides were “close to the final round” of negotiations. While no details of the deal have been disclosed, Washington is seeking changes to China’s economic and trade policies, particularly around their IP practices, while China wants more access to US markets, specifically finance. The big question everyone is asking: will there be deal and what will happen next?

Experts seem to agree on one point; a deal does not mean this trade dispute is over. Even if there is a “comprehensive” deal, it likely only marks the beginning of such negotiations between the two nations. The broad headline terms appear to have been determined based on media reporting. These include a mutual tariff rollback and softer US stance towards China. In return, China will no doubt have to commit to broad purchase commitments for goods and services. The inevitable sticking point is reported as being the framework on protecting foreign intellectual property rights. Negotiators are still grappling over its terms and how they will be enforced.

Alternatively, if neither side can compromise (and both sides politically likely need a deal) and a deal falls off the table, then there is a risk of further tariff increases which will have a significant impact on goods from China to the US as well as any reciprocal tariffs raised by China on US exports. Whether or not Trump will choose to enforce his tariff increase is yet to be seen – it has to be a last resort – but it is clear that the US will continue to hold the threat of tariffs over Beijing to ensure its commitment to the final deal.

Is Vietnam the Winner?

Inevitably, there has been debate as to which Country is likely the beneficiary for US Buyers to reallocate their dollars. Vietnam appears to have been mentioned the most times given how its manufacturing sector has developed over the past five years and has actually taken relative market share away from China; more so than any other Asian nation. However, there is still a lack of evidence to directly support this claim. The country, along with Southeast Asia as a whole, was expected to benefit from the lack of a resolution. One commentator told CNBC earlier in the year that it was still a bit early for Vietnam to be benefiting in any significant way from the trade disputes. Some reports have indicated companies have begun shifting production from China to avoid tariffs; however, others say this is just a continuation of the ongoing trend towards diversifying production outside of China.

From our perspective, although there are certainly opportunities to leverage what is an evolving export manufacturing sector, the ‘elephant in the room’ is likely going to be capacity in the short term. It takes time to develop. At Factory level, the commercials need to make sense before the investment is made available and that needs to be more than simply the imposition of temporary tariffs. There needs to be a structural shift.

To provide some insight, we recently visited a furniture factory in Vietnam who had just met with a large US retailer looking to relocate some production out of China. Although the meeting was positive and there was a clear commercial opportunity, the factory owner, when asking about volumes, realized that one SKU for this retailer would be 110% of their annual capacity. Compared with China, capacity in some of the other Asian markets is an issue in the short term.

There is no doubt that US Corporations manufacturing products in China, if not producing in alternative markets already, are looking for alternative locations.

According to a recent survey by the Swiss Investment bank, UBS thirty-seven percent of respondents had moved some production out of mainland China in the past year. Another thirty-three percent noted they plan to move some production within the next six to 12 months. A part of this was driven by the imposition of tariffs and the need for diversification whilst the import duties were in place.

The location of alternative manufacturers will be dependent largely on the products and the complexity of the supply chains to be able to make those products. This will include raw material availability, infrastructure, regulatory and compliance requirements, labor force and capacity to name a few points that must be addressed.

What to Consider Before Leaving China?

The US-China trade war has added new energy to shifting production out of China. Whether companies are moving due to the trade war and or are looking to diversify their sourcing locations there are many factors to consider:

The outcome of the trade war is yet to be determined. The current information from both sides appears to be at least framed in a positive light but there is no certainty as to what the conclusion will be. Many commentators are suggesting that both sides need a deal although the one thing that is certain is the US administration can be unpredictable.

At ET2C we are dedicated to building close relationships with our clients and ensuring we are not only informed but well versed in sourcing trends. We are currently working with our US clients to assess and look at alternative markets within Asia for their production. We offer multi-industry sourcing, procurement, and quality control solutions that help our clients get the most out of their Asian manufacturing base. Contact us for a discussion about your current supply chain.