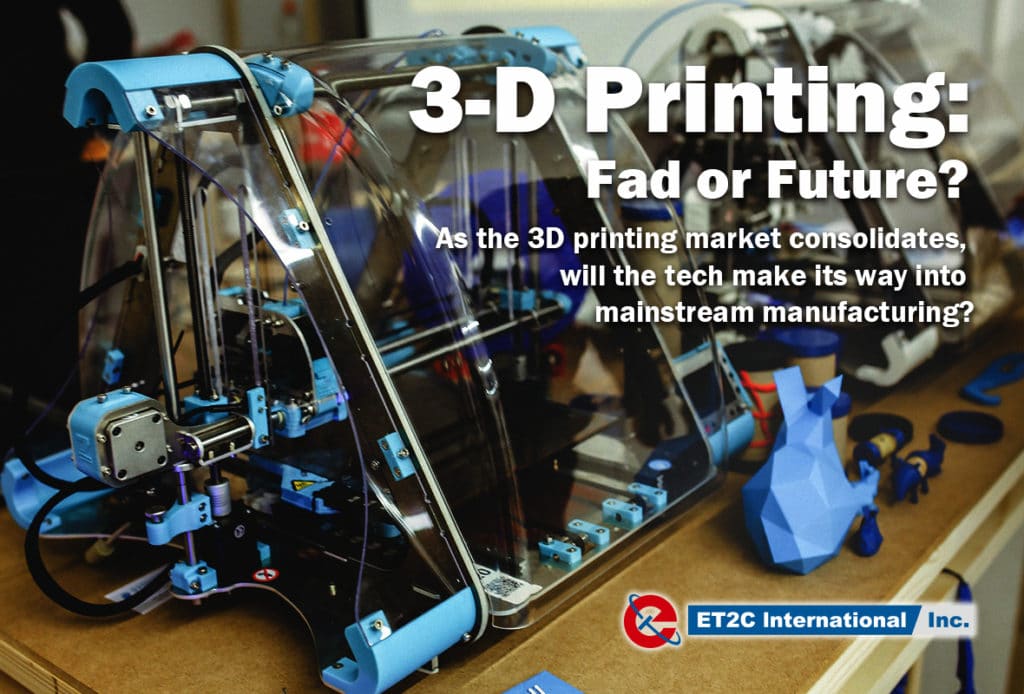 When 3-D Printing is brought up, I generally tend to think back to the tiny plastic wrench I received during my father’s “bring your kid to work” day. Almost too short to see into the machine, I watched with amazement as the engineer effortlessly programmed it to produce a small bolt. I believe part of me expected the machine to pop out the object in a matter of seconds, but the huge contraption whirred for a while, only to slowly get to work printing the small plastic component. The tour guide then handed us all a small plastic wrench which he claimed came from the machine and we continued onward.

That “bring your kid to work” day was most likely around 2004 or 2005, and while it was amazing to me then, 3-D Printing has come a long way since. Before examining the present, the fact that 3-D Printing is not a new technology is rather noteworthy. The first 3-D printing attempts were made in 1980 by Japan’s Dr. Hideo Kodama, whose rapid prototyping machine pioneered the field of Fused Deposition Modeling (FDM). The technology continued throughout the eighties, with the following decade seeing the first use of 3-D printing in the medical field and the gradual adoption of 3-D printing by other industries.

However, progress for 3-D Printing really picked up in the last decade due to FDM patents becoming public domain. This allowed many companies to pick up the technology which increased the visibility of 3-D printing. Soon 3-D printing was brought up in almost every headline, from Cornell University’s 3-D food printer, the technology being mentioned in Barack Obama’s 2013 State of the Union Address, and the ability to 3-d print bone.

Even so, the hype has begun to die down a bit. Concerns over health and expenses, in addition to bigger trepidations grabbing our attention away from the technology, have caused the tech to shy away from the spotlight of news media. However, the technology itself has not gone away. 3-D printing is still being utilized on a massive scale by numerous companies for a multitude of uses.

While 3-D printing may not be making headlines as much as it used to, many companies are still utilizing the technology as an innovative and effective tool. Here’s how some of the top companies of 2018 are utilizing 3-D Printing in their processes.

As a Pennsylvanian, there is a special place in my heart (and my stomach) reserved for Hershey’s chocolate. Even though Hershey’s candy products have been a staple dessert food for generations, the company has set their eyes on the future. The company 3-D Systems has partnered with the famed candy producer to create a 3-D printer that can be used for chocolate and other edible products.
At the same time, the technology Hershey’s hopes to incorporate into their production process is nothing new. 3-D System’s “SugarLab” projects have produced other sugary treats using 3-D printing methods, including icing and hard candy products. Still, it remains to be seen whether or not Hershey’s will use this technology in mass production or, as most companies do, a prototyping tool (Gilpin, 2014).

In the tremendously competitive footwear industry, shoe manufacturers must hunt for any comparative edge they can find. When American football players began to demand a faster shoe, Nike jumped into action and developed 3-D printing techniques to assemble a custom-made plate for the cleats that enhanced the players’ form and speed. Nike quickly realized the potential of 3-D printing since this breakthrough and has customized shoes through 3-D printing for Olympic runner Allyson Felix and for a specific drill used in American football called “shuttling” (Hannon, 2018).
Nike has displayed the immense arena of customization for the world to see, encouraging other companies to gain visibility either by customizing shoes for their customers or for professional athletes. However, Nike has continued to show off their own customized shoes’ power as well, with one recent flex of power being the Breaking2 event. This event saw marathon runner Euclid Kipchoge just miss the barrier two-hour marathon barrier by twenty-six seconds while wearing a specially-designed shoe made using 3-D printing. While Kipchoge couldn’t accomplish the feat, he still ran two and a half minutes faster than the previous record, exhibiting the amazing power of 3-D printed customization. Notably, Adidas has also 3D printed a trainer as well as well although the commercialization piece has yet to be fully resolved.
While 3-D printing has helped these companies develop new products and enhance their offerings , there are still some widespread concerns revolving around the adoption of 3-D printing in the production process.

The Hazards of 3-D Printing

When any new technology becomes adopted in manufacturing, it is almost immediately thrown under the scrutiny of both producers and consumers. 3-D Printing is no exception, for the new technology has caused many to be concerned over the high cost of the products, as well as some health concerns that come along with the input materials used by the printers.

In spite of some safety regulations, long-term exposure to the materials used by 3-D printers and the printers’ byproducts has been suggested to be dangerous for one’s health. Recent studies have shown that hazardous vapors and gases are released during the printing process. Specifically, two of the most dangerous byproducts of 3-D printers are UFPs and VOCs, which are acronyms for ultrafine particles and volatile organic compounds.

Another factor driving hesitation among manufacturers are the costs of 3-D printing. While many are familiar with the high mark-ups surrounding 2-D printer ink, the mark-ups for 3-D printer ink are generally quite high. Standard 3-D printer “ink” will range from $25 to $45, even while the plastic pellets used in the filament only cost around $2/kilogram. Such high mark-ups drive many companies to not even give a second glance to 3-D printers once seeing the price tag of their materials, opting for cheaper methods of production instead.
However, it should be mentioned that the cost of this printer “ink” is decreasing as more companies enter into the 3-D printing market. Competition has lowered the price of this ink in some instances, with companies like BeeCreative, 3D Systems, and MakerBot all attempting to gain customers through lower “ink” prices. Printer “ink” may be able to lower its price in the future as more companies enter the market, but as it stands now, the materials used in 3-D printing need to see a price drop before being considered for large-scale production (Covert, 2014).

The Benefits of 3-D Printing

While some of the concerns over 3-D printing may portray the product as having a lot of rough edges that need to be smoothed out, there still are many benefits 3-D printing can bring to a company. From effective prototyping to increased offering potential, 3-D printers have become a valuable asset in the world of manufacturing.

A Time and Money Saver
“Time is money” is a familiar saying to any businessperson or media consumer. Likewise, spending lots of time on the development process could be seen as a waste of valuable resources. Fortunately, 3-D printing can address some of these concerns. Instead of undertaking a process like mold making, which can cost thousands of dollars, take up to a week, and is generally a sunk cost; 3-D printing can print directly onto a surface without any need for a mold. This allows companies to save money, be more receptive to customer responses to new products, and allocate the saved time to more important tasks.

Easily Customizable
Like stated above, the process of 3-D printing lets companies to more easily respond to customer demands. Yet, 3-D printing could even eliminate the need for a company to guess the desires of a customer all together. Now, 3-D printing can allow consumers to customize their products however they would like them. This could easily be done through a web-platform interface or application where the user could input their choices and a 3-D printer develops a product customized to their exact parameters.
Furthermore, 3-D printing can also make it easier for companies to develop a limited-edition or one-off products easily. With reduced upfront costs in addition to minimal reliance on factory labor, 3-D printing is a decent answer for small batches of customized products.

3-D Printing is by no means new. Nearly a decade after the technology became public domain, the market has exploded with start-ups offering a variety of products related to the new technology. Even so, like any new invention, 3-D printing still has some way to go to be truly mainstream and part of the actual bulk production line. Nevertheless, the tech has been able to find its way into some companies like Nike and Hershey’s due to its ability to save resources and speedy customization capabilities. Certainly, 3-D printing will need to address the concerns over health and costs in order to scale up its use in production, but the tool is still great for companies looking to produce small batches of customizable products or quickly design prototypes.

At ET2C we have utilized 3D printing for prototypes and sampling where our clients we may need moulding to be opened for bulk production. This has enabled approval of fit, function and form prior to any CAPEX being incurred and has streamlined the development process. Although this is not a mainstream manufacturing process (too expensive) at this time, it’s current use in the prototyping phase of product development has been invaluable as a proof of concept.
However, with more technological advances, there is no doubt that in the future 3D Printing will have a broader application enabling customization and personalization to be possible on a large scale.