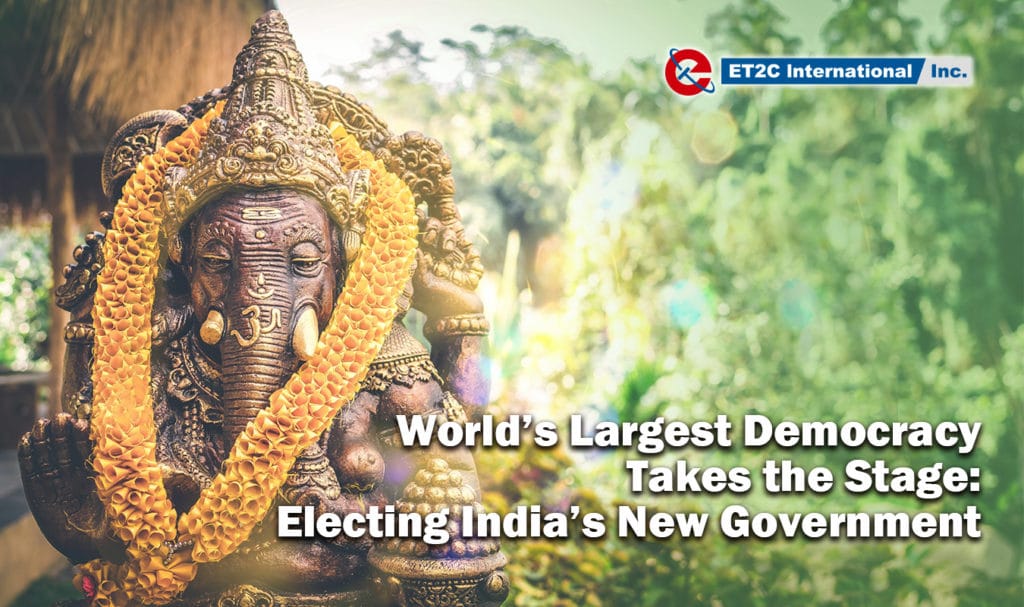 India has recently kicked off the world’s largest democratic exercise to elect the new Central Government. It is a significant undertaking. With a population of around 1.3 billion people (India’s population is expected to surpass China’s within the next few years), the number of eligible voters accounts for roughly 10% of the world population. Out of those 900 million voters, 100 million are first time voters with the major parties spending big to garner their support. The elections will take place in seven rounds lasting from April 11 to May 19th as 1 million poll workers traverse the vast country to ensure each registered voter can place their vote.

As the world’s second most populous country, the elections are being closely watched. The country’s growing economy, young emerging workforce and sector specific opportunities suggest it should become an economic powerhouse in the near future. The outcome of this election will therefore not only shape India’s future but the global landscape.

Modi’s first term in office was ushered in on a wave of hope and opportunity. Months after taking office in 2014 he had stood under the shadow of a large logo of a lion, unveiling his economic vision for India to become a manufacturing powerhouse (similar to China’s aspirations around the turn of the Millennium). He set a target for the manufacturing sector to be 25% of India’s GDP by 2025, which would create millions of new jobs along the way.

What Will Be Determined?

The elections are to decide the 543 elected seats in the lower house of India’s parliament called the Lok Sabha. A party must win at least 272 seats in the house to create a government and gain the right to nominate the prime minister and fill the cabinet. If no one party can win the majority, the party with the most seats has the opportunity to build a coalition to form a government for the next five year term.

From a manufacturing standpoint, it is worth looking at the leading parties’ manifestos to understand what the possible implications will be.

Of note, the BJP is committing to investment in artificial intelligence, block-chain and data analytics and specifically references implementation in the manufacturing sector and industry 5.0.

It remains true, however, that the past five years have been mired by a lack of investment in infrastructure, regulatory vagueness, bureaucracy and an inability to bring in the foreign direct investment required to support the growth in manufacturing. In 2017-18 FDI growth was a mere 0.23%. “Made in India” was supposed to bolster the countries manufacturing, however, only 14.66% of FDI was in manufacturing sectors such as automobile, power, drugs and chemicals. On the other hand, FDI in non-manufacturing accounted for 60% from 2016 to 2017.

While “Made in India” has yet to create much for the manufacturing sectors, India’s economy has grown within the last five years; but many wonder at what cost. Modi and his party have lost some popularity as voters are concerned with the current state of unemployment and distress felt in the agricultural sector.

His main opposition, Rahul Gandhi is the face of the Indian National Congress party (INC) and is the scion of Indian political dynasty. While the BJP is pro-business, pro-liberalism and socially conservative, the INC has a broadly secular, socially democratic manifesto. Although not specifically referencing artificial intelligence in their manifesto, it is evident that they also are looking to bring technology to the forefront of Indian industry. Within the tech sector, relevant to manufacturing, they plan to establish a National Mission focused on sunrise technologies. These include big data, Internet of Things, 3D printing and manufacturing and knowledge networks.

Both leading parties see infrastructure as the key to increasing manufacturing. The congress party seeing it as “a basic weakness of the Indian economy… Flawed design, inefficient execution, insufficient capacity and poor maintenance of infrastructure have dragged India’s growth rate down” (as by the INC manifesto). At the same time, Modi and the BJP party have promised to double the length of all highways by 2022, finish their freight corridor project by 2022, double port capacity in 5 years, and double the amount of airports. Gandhi has made similar promises, specifically targeting highways, railways and electricity. In addition to augmenting the total length highways and modernizing the railway system, he promises investment in clean, green energy.

Likewise, both parties see technology, and its ability to create efficiencies within manufacturing that will allow it to compete on the global stage, as a key pledge. Whether it can keep pace with China, remains to be seen.

Trade Relationship with the US

Once the ballots are counted, the new government will confront lingering trade issues with Washington. With the United States current strong-handed international policies, the new government must navigate the tensions of the US-India trade relationship. Like with the US-China trade relationship, issues include intellectual property right protection, “forced” localization, and capped FDI. In March of 2019, President announced his intent to terminate India’s GSP eligibility, an action likely to disturb trade between the two nations.

There is no doubt that the current election will have a significant impact on India’s development over the next 5 years.

Export Manufacturing has always been a key sector for developing economies where there is an opportunity to tap into low cost labor; this economic model has been tried and tested. The Indian manufacturing sector is incredibly diverse, from handmade wooden tools, garments and shoes through to automobiles, aerospace and OTC drugs. Both parties, perhaps unsurprisingly, have identified manufacturing as a key sector to invest in. The ability to address domestic issues such as regulation and infrastructure along with the implementation of technologies will ultimately determine how attractive India will become as a destination for sourcing. It is an incredibly complex business environment to operate in and there is still much work required to overcome some of these hurdles.

Whichever Party wins the election, there is perhaps an opportunity for the Tiger to finally emerge and compete with the Dragon beyond its Northern borders. For all Indian manufacturing inquiries, please contact us.