EVFTA. The true meaning of the Free Trade Agreement between Europe and Vietnam 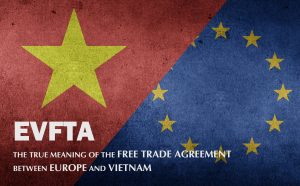 The European-Vietnam Free Trade Agreement (EVFTA) is expected to be signed in the later months of 2018. Talks concerning the trade pact ended in 2015, but according to Vietnam’s Minister of Industry Tran Tuan Anh, it took longer than normal to finalize the specifics of the deal because the European Court of Justice wanted to ensure investment protection by enacting a separate Investment Protection Agreement (IPA). As of July 2018, The EU and Vietnam have concluded the legal review, and now they await the signing and implementation of the deal.

The European Parliament describes the FTA signed with Vietnam as the most ambitious trade deal signed between the EU and a developing country. This deal will eliminate 99% of customs duties on products, it will open up the Vietnamese market to European investment, and the European Commission estimates that the agreement could increase Vietnam’s booming economy by 15% of its GDP. The impacts of this could include furthering European-Southeast Asian trade, improving Vietnam’s manufacturing and consumption standards, and supplying European companies such as Adidas and Audi with a cheap and reliable manufacturing market. The agreement has been met, but it will take some time before the effects of it are felt because it must be signed and ratified by the EU and its 28 member states.

Europe will eliminate tariffs placed on farm produce, sugar, honey, seafood, processed agricultural products, garments, textiles, footwear, and auto industry imports from Vietnam. This reduction in customs duties is expected to increase Vietnamese exports to Europe by 4-6%, and it will bring European investment into finance, automobile manufacturing, information technology, and high-tech agricultural products. The impact of this would be a diversification of Vietnam’s economy, provide a path to more sustainable economic growth, and it would help alleviate poverty.

At the beginning of the FTA talks in 2015 only 42% of Vietnam’s exports into the EU enjoyed a zero tax rate. These zero tax products were usually light industry and low-tech goods, and got this benefit because of the EU’s Generalized Scheme of Preferences (GSP), which seeks to aid developing markets by offering tax reductions. As Vietnam’s economy develops and matures the GSP will no longer be applied, so there is a need for a new system – the EVFTA. This agreement should continue the trend that is shown in the graph below of the gradual increase from 2005 to 2015 in trade between the two parties from.

Highlights of the EVFTA

Through the EVFTA, the EU will liberalize 71% of its import from Vietnam starting on day one, and 99% will enter duty-free after seven years. Custom duties will be removed over a transitional period so that domestic producers can gradually adapt. Consumers from both sides will benefit from lower prices and exporters from strengthened competitiveness.

The main goal of the FTA is to facilitate exports between Vietnam and EU, many actions will be taken to achieve that goal; here are a few examples:

The FTA also represents an opportunity to increase EU exports into Vietnam for very specific and important industries that will both boost the EU economies and improve consuming standards of Vietnamese people. Cars, pharmaceutical products, alcoholic beverages will see specific trade facilitations for exports to Vietnam. It is expected that in the ten years after the passing of the deal, tariffs on European beverages being imported into Vietnam will be eliminated. This will serve to benefit many European enterprise associations and firms such as spiritsEurope, the Scotch Whisky Association (SWA), and France’s Pernod Ricard, and the Vietnamese consumers. Currently, only 19 percent of alcoholic beverages in Vietnam come from imports.

Many European companies such as, Adidas, Puma, and Daimler (Mercedes Benz) are already building additional manufacturing sites in Vietnam to take advantage of its good quality and cheap workforce, its resources. The EVTFA will increase the number of European factories and boost investments into Vietnam.

Although Vietnam has agreed to all the aspects of the FTA and IPA, there is still a ways to go for the country to be able to follow the regulations set out. In order to assist with the development of Vietnam’s legal and economic capacity, Miriam Garcia Ferrer, Head of Economics and Trade Section of the EU’s Delegation to Vietnam gave several recommendations. She emphasized the need for Vietnam to develop more mature manufacturing industries in order to promote sustainable economic growth. She also pledges Europe’s support in developing new economic sectors in the developing country. This will be accomplished because more European businesses are being attracted to Vietnam and they are bringing technology, knowledge, and expertise in certain fields.

The EVFTA will usher in an era of trade between Vietnam and Europe like never before. The new opportunities will be great, but there will also be challenges associated with doing business in a new part of the world at such high volumes. It will be centripetal that companies seeking to do business work with established businesses to find proper manufacturing links.

With eighteen years of experience in China, and ten years of experience in Vietnam, ET2C International has an extensive knowledge of the local supply-chains and manufacturing sectors in both of these countries. This trade deal presents great opportunities to companies and ET2C is committed to using our knowledge of the markets, supply-chains, and sourcing to provide benefits to all the parties involved. 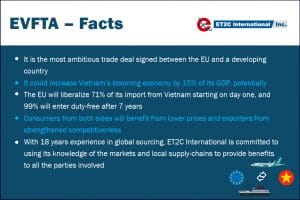 Strategic Sourcing for the New Now

We use cookies to ensure that we give you the best experience on our website. If you continue to use this site we will assume that you are happy with it.ACCEPTPRIVACY POLICY