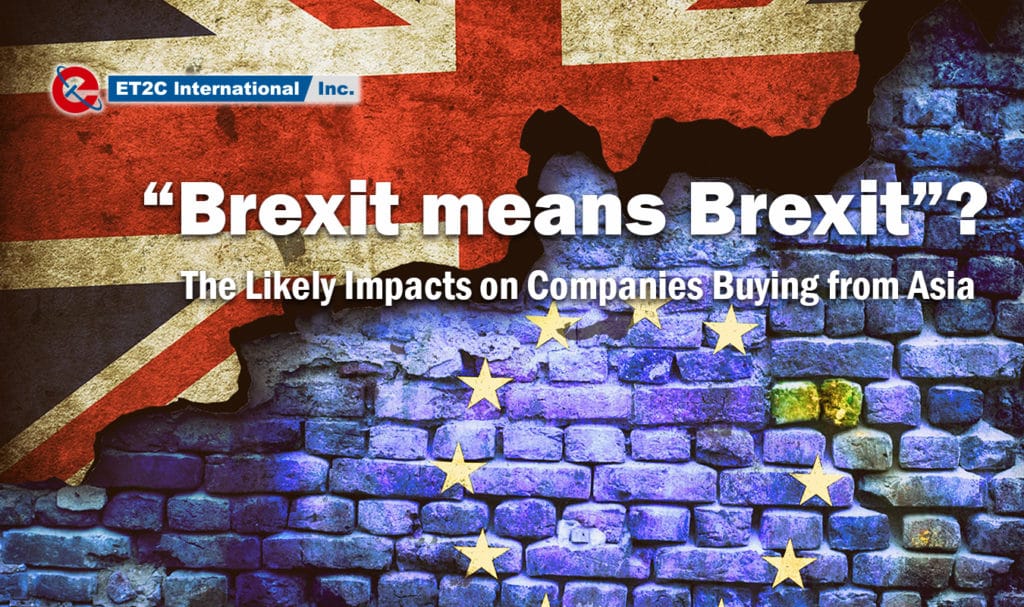 Ever since the United Kingdom’s 2016 vote to leave the European Union, Brexit has had the world on the edge of its seat as the country attempts to negotiate its removal from the EU. The roller coaster was set to end on March 29th. However, the EU has had to agree to grant a short extension that provides additional time (12 April or 22nd May deadlines) depending on the type of Brexit.

If you feel confused or concerned, you are not alone. The two and a half years of negotiations have caused citizens and businesses alike to question the certainty of the UK’s future and how it will impact them. With uncertainty on the rise and a volatile Sterling, how is Brexit affecting the supply chain? Single Market or Customs Union? May’s Deal, No-Deal, Norway plus plus, Backstop or more negotiations? British politics has never been caught in such paralysis and the haze of uncertainty continues to cloud the way forward.

A Leap into the Unknown

This has not helped general market confidence. The prolonged negotiations have adversely impacted companies operating in the UK as well as the appetite for any foreign investment. The Bank of England has suggested that Brexit is costing the UK economy $1Billion a week as market sentiment and consumer confidence drops. According to the BBC’s poll of 2,500 firms, the “persistent lack of political clarity” is highlighted as one of the leading economic costs of Brexit. Many national and multinational companies are beginning to prepare for the worst outcome as they are unsure of the UK’s future. Businesses are expecting to see lower sales in the long term, which is having a significant impact on sourcing, investment, employment, and overall productivity.

Foreign entities concerned with political uncertainty are questioning whether or not to maintain or continue investing in the UK. Companies, such as Nissan and Honda have announced they would be lowering their production in the UK. Nissan specifically noted they are looking to focus on sales in North America and China while moving production of their Infinity Q30 and QX30 to Japan where the model is selling better. Other companies are also beginning to create “avoidance” plans to limit the effects of the Brexit “drama.” Businesses are becoming leaner and more aware and concerned about decision making.

The British pound (GBP) hit a 31-year low dropping over 15% against the United States dollar (USD) immediately after the June 2016 Brexit vote and remained weak for the remainder of the year. Volatility and weakness were themes throughout most of 2017 and 2018 as the Politicians worked through the implications of what Brexit meant, and without much success. The GBP volatility is expected to remain high, at least for the near term, due to the possibility of a no deal Brexit on April 12.

As currency hedges expired, the weak Pound had an immediate impact on the cost of importing products from Asia, where USD is the currency of choice. On a relative basis, this had the effect of adding up to 20% to the cost of goods where there were no natural USD hedges available.

This at a time when the UK retail sector is already in a state of disruption and the ‘High Street’ is in decline. There has been a reluctance to therefore pass these price increases directly to the consumer, or at least be the first mover among the competition in order to retain as many customers as possible.

Inevitably, this has forced British businesses to adopt leaner inventory management (smaller and more frequent orders) if they were not already whilst also pushing back to the suppliers to identify additional cost reductions. Whether a product can be re-engineered or the supplier can absorb some of the cost, British companies buying from Asia have found themselves not only up the Creek but having their paddle taken by the self-interest of British Politicians.

The UK without the Customs Union.

One of the big talking points of the negotiations focuses on whether the UK should remain part of the Customs Union. As a member of the EU, the UK currently participates in around 40 free trade agreements with over 70 countries. Should there be a complete break, the UK’s status at the WTO would change and EU trade agreements would cease to apply to the UK once it officially leaves. Without the customs union, the UK will have to negotiate their own bilateral trade agreements. The UK has already signed eight transitional trade agreements and three mutual recognitions, one of which is with the United States. These agreements are considered in effect when the EU agreements no longer apply to the UK, either at the end of the implementation period or on April 12 if the UK leaves without a deal.

Where trade agreements are not in force, trade will likely take place on World Trade Organization (WTO) terms using a new applied UK ‘most-favored-nation’ (MFN) tariff schedule. From a pure importing perspective, this may reduce some anti-dumping tariffs imposed by the EU on certain products and may create a potential upside.

Trade agreements aside, there are practical implications that companies are trying to also grapple with and plan for; the actual movement of goods into UK ports, or how to clear customs into the EU, or what additional documentation needs to be prepared etc. The level of uncertainty has resulted in companies having to invest time and resource into a smoregus board of eventualities.

Ultimately, it is not clear whether being outside of the Customs Union will allow the UK to negotiate better trade agreements with the likes of China, India and Vietnam. Counter arguments on this point have been a feature of the past 1,000 days and although the UK will no doubt have less bargaining power (compared with the EU bloc), it may be possible to negotiate deals more directly relevant to the UK economy.

A soft exit is preferred by most to prevent economic shock to the UK’s economy and would see more positive effects.

While no one wants Brexit to end with a no-deal, it is still a possibility as it is the default if an agreement cannot be reached by April 12. A no deal would cause immediate short-term effects.

It is impossible to predict the outcome of Brexit. After 1008 days since the Brexit vote, not even the Politicians are any clearer than the morning of the ‘leave’ vote. At the time of writing, the British PM is offering to fall on her own sword as a last-ditch attempt to push through her ‘deal’ at the third time of asking. Uncertainty is never a good specter to have lingering in the background for business and being as well prepared as possible is the only option available. It is just a shame that being prepared was something that British Politicians took all too lightly as they invoked Article 50.

At ET2C, we seek to understand our client’s needs and understand how these impact their individual supply chains. We are continually staying up to date with the latest Brexit developments to help our clients maneuver the ever-changing Brexit landscape.